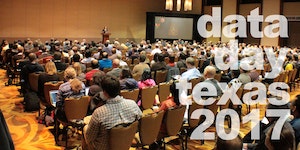 We’re doing something a little different this episode. A couple weeks ago we camped out at Data Day Texas, a huge event focused on data science techniques and technologies that’s held in lovely Austin, TX. We talked to a bunch of the speakers, chatted with some attendees, and went on a mission to find the most overhyped idea in data science (hint: it rhymes with steep yearning).

Jonathon was joined by a couple friends of the show, Ashley McNamara, who long-time listeners will remember as a two-time guest host, and Dave Sullivan, making his on-air debut. As you’ll hear throughout the episode, Ashley and Dave are both clearly more intelligent and funnier than Jonathon.

Here’s who we talked to

Apologies to the other people who chatted with us whose names we didn’t catch. If you hear yourself on the recording, let us know and we’ll list you hear and give you a shout out on Twitter.

Make a Difference We started a community for data people who want to find impactful projects and meet collaborators. Check out Data for Democracy, and come hang out with us!

Work with Us New Knowledge, the company we run when we’re not making the podcast, is hiring! Come work with us!

Sponsors! We’d also of course like to thank this week’s sponsors, Veera and Periscope Data.

Veera is a data synthesis platform that makes working with data easier and more fun. Check out Veera, and go be a data superhero!

Periscope Data lets you go from SQL query to analysis in seconds. Sign up for a trial to get an adorably geeky mug!